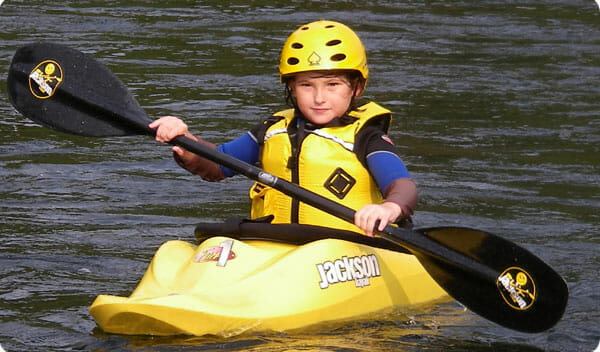 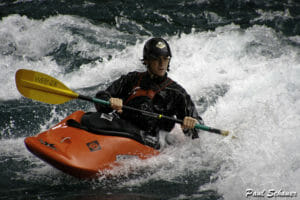 In the short time they’ve been in business, Jackson Kayak has built a reputation for mass producing fun and affordable kayaks.

Their boats have become increasingly popular over the years, especially their freestyle whitewater kayaks like the “Fun” and “Rock Star” models. These boats have proven themselves in ICF Freestyle World Championship competition time and time again.

Jackson Kayak founder and president Eric “EJ” Jackson is a four-time freestyle champion himself, so you can be sure the company knows how to make freestyle boats. Jackson kayaks have a well deserved reputation for being extremely lightweight and rugged, although you need to be careful with the carbon/fiber hull models as they can be damaged by sharp rocks, especially in shallow, rocky whitewater.

In addition to the freestyle boats, Jackson also produces several creekers/river runners, recreational and touring kayaks, fishing models and a line of boats designed for the youth market.

Jackson Kayak, a company started in 2003 by EJ and Tony Lunt, has grown in popularity over the years, especially among whitewater paddlers. The company is headquartered in Sparta, TN, and has a 100,000 square foot manufacturing facility in the small town of 8,000 people.

Jackson makes a full line of kayaks, including a half-dozen whitewater models, creekers, freestyles, tandems, river runners and more. They also make recreational and touring models, fishing kayaks, and a variety of kids kayaks. They manufacture all their plastic boats in house, along with accessories, clothing, and they even do custom manufacturing for playgrounds, other kayak companies, and more.

Jackson Kayak’s recreational and touring kayaks include the Day Tripper, Journey, Rogue, Regal and several more. They use the same plastic resin hull materials in their touring kayaks as they use in their hard core whitewater kayaks, which means these boats are light and strong. Their fishing kayaks are the Coosa Sit On Top model, and the DayTripper, which is a canoe/kayak hybrid. And their youth line incudes the Side Kick, Little Hero, Mini Tripper and more.

In our admittedly unscientific survey, most Jackson Kayak owners are a satisfied bunch. A few nitpicks aside, these boats get generally high marks for their innovative designs and attention to detail.

As reported, Jackson kayaks are extremely lightweight due to the innovative cross-linked plastic hull materials they use (although they can also be easily damage by sharp rocks, see paragraph below), which makes porting your yak up and down the river a breeze. These boats, especially the freestyle boats, tend to handle well, roll easily, spin on a dime, and make outstanding playboats for all skill levels. The design and craftsmanship are top notch.

The touring and recreational boats also get high marks for their stability and neutral handling. One reviewer thought the Journey 14 was best equipped with a skeg or rudder system, and Jackson’s Smart Track rudder system got high marks from users,  as it utilizes rock solid footpegs with gas pedal type steering. These boats also have ample storage, well made fittings and comfortable seats, even on long all-day paddles.

The only real complaints we’ve heard about Jackson Kayaks involve the hulls on the whitewater boats. There’s one drawback to the light hull materials they use on some of their freestyle models – the fact that they’re easily damaged under the wrong conditions, especially the carbon/fiber hulls.

Eric Jackson admitted as much in a recent company press release. He advises owners to avoid shallow, rocky whitewater whenever possible. Like any hulls, these yaks can be repaired, but it’s best to avoid problems in the first place.